In “EP 8: What Brazilian Jiu-jitsu Can Teach You About Making Money” of the “One Eye Deer” Podcast, we explore how the attempt by the Gracies to showcase Brazilian jiu-jitsu during the ultimate fighting championship or UFC paid off.

The Gracies are a legendary family from Brazil that developed the modern BJJ system in around 1920 and passed down to subsequent generations. 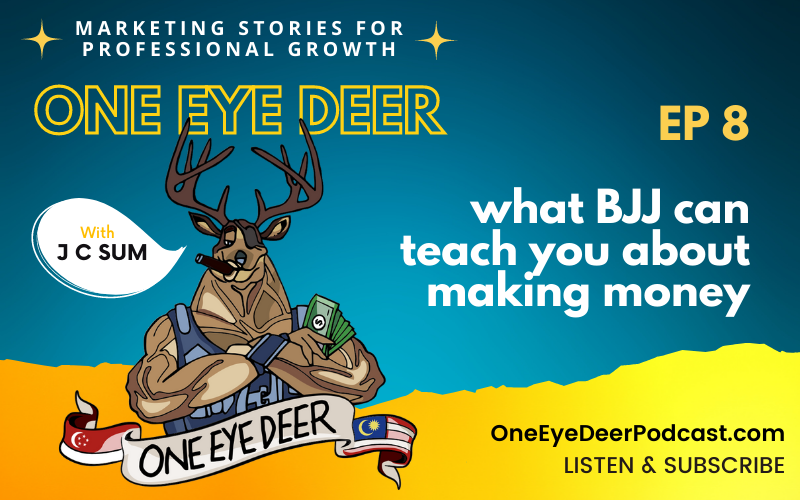 The chosen brother to represent the Gracies in UFC 1 was Royce Gracie. UFC 1 was the first mainstream mixed martial arts or MMA tournament. He was not the best or biggest Gracie fighter, but they wanted to show that a smaller fighter could beat bigger fighters with BJJ. The motivation for presenting UFC was to showcase Gracies’ Brazilian jiu-jitsu system to the world.

Ultimately, pun intended, their attempts paid off. Royce ran through the UFC tournament and beat 3 opponents (all larger than him) in one night to win UFC 1. He would repeat the feat the next year at UFC 2.

Eventually, BJJ got the global exposure and rise in popularity that was intended. Today, every MMA fighter on the planet will train BJJ as one essential part of their skill set.

So what’s the secret behind the success of BJJ?

Join certified marketing management consultant, J C Sum, as he discusses further what you can learn from the Brazilian jiu-jitsu to make more money for your career or business.

01:35 The Gracies and their history with Brazilian jiu-jitsu.

05:49 Real-life examples that can be used for your business or career.

Subscribe and listen to all our podcast episodes on:

Join us on social media for our latest updates:

About One Eye Deer:

The One Eye Deer podcast is produced by Evolve & Adapt, an award-winning strategy & digital consulting firm based in Singapore and Malaysia.

If you are looking to build your brand and generate massive leads and sales, book a marketing consulting call at EvolveAdapt.com

The name of the podcast was inspired by the riddle:

What do you call a blind deer?

Since the podcast explores one marketing idea each episode, it features “one idea” (one eye deer).

The podcast is more than 2 years in the making. The idea of a podcast was first conceived in early 2020. It took shape as “One Eye Deer” in Feb 2021 and finally launched 13 months later.

The “One Eye Deer” mascot was designed by Eugina Lee (IG : lee.eugina) based on the concept developed by J C Sum.

One Eye Deer theme performed and produced by Darren Teh, An Honest Mistake.

One Eye Deer EP 11: You Must Spend Money to Make Money