In “EP 4: Why did “Ah Girls Go Army” the Movie Make $2.5mil?” of the “One Eye Deer” Podcast, we explore how a film that was universally  critically panned still made big money at the local box office. 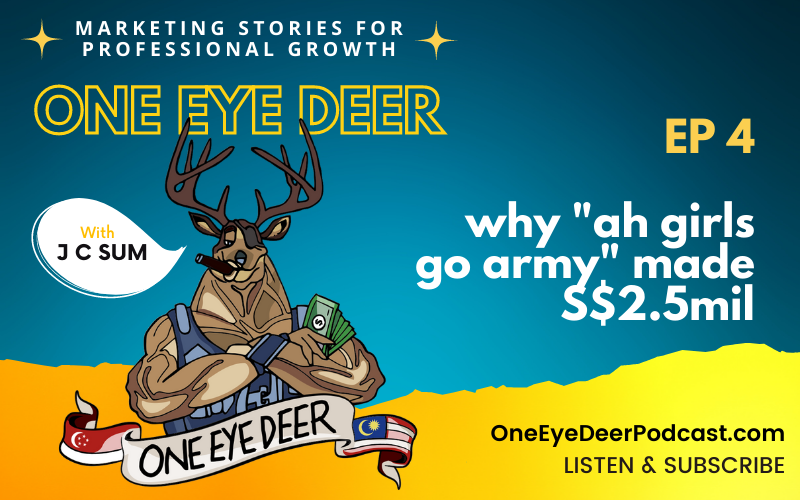 For the spin-off “Ah Girls Go Army”, it received widespread criticism and scorn prior and after its release. Despite these bad reviews, Ah Girls Go Army has made $2.5mil  as of 17 Feb 2022 off a $2mil budget. Factoring marketing, it would not have made money off the box office yet. However, there was a lot of sponsorship money involved which should have covered most costs, if not more. So ultimately, it is still a financial success for the producers.

So, why did “Ah Girls Go Army” make $2.5 million in under 3 weeks of its release even though the reviews are so bad?

Join certified marketing management consultant J C Sum, as he shares his experience working with director Jack Neo’s production team on a TV show and explores why Jack Neo’s movies are so successful with local audiences. What is his secret formula?

09:10 Adding value to your organization as employees

11:44 Determining who you want to serve as business owners

15:05 One reason why businesses are not as successful as they can be

Subscribe and listen to all our podcast episodes on:

Join us on social media for our latest updates:

About One Eye Deer:

The One Eye Deer podcast is produced by Evolve & Adapt, an award-winning strategy & digital consulting firm based in Singapore and Malaysia.

If you are looking to build your brand and generate massive leads and sales, book a marketing consulting call at EvolveAdapt.com

The name of the podcast was inspired by the riddle:

What do you call a blind deer?

Since the podcast explores one marketing idea each episode, it features “one idea” (one eye deer).

The podcast is more than 2 years in the making. The idea of a podcast was first conceived in early 2020. It took shape as “One Eye Deer” in Feb 2021 and finally launched 13 months later.

The “One Eye Deer” mascot was designed by Eugina Lee (IG : lee.eugina) based on the concept developed by J C Sum.

One Eye Deer theme performed and produced by Darren Teh, An Honest Mistake.

One Eye Deer EP 7: Brand an Idea in One Sentence to Sell It