In a previous blogpost, we covered why Facebook is one of the most effective digital marketing channels available. In this post, a Facebook-certified Media Planning Professional and Creative Strategy Professional shares 5 tips on how to run a killer Facebook campaign that will bring you traffic, leads and sales. 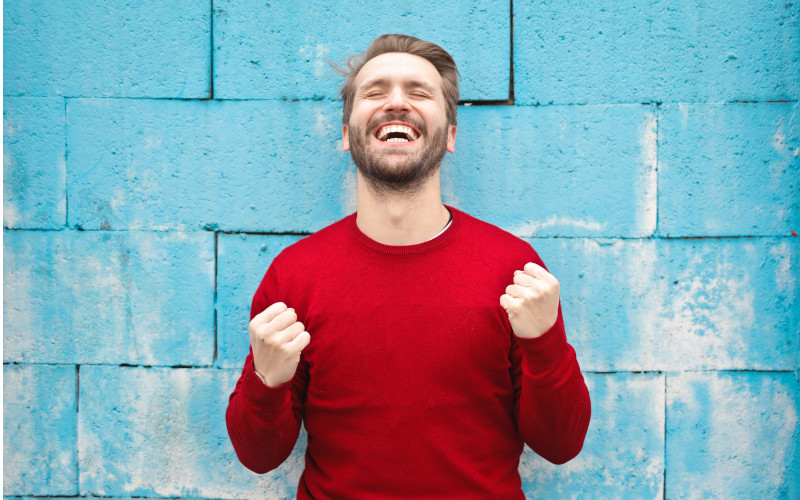 Before you even set up a Facebook campaign, you have to know what your end goal is. Facebook helps you to make this process more intuitive by giving you quite a few options to choose from: 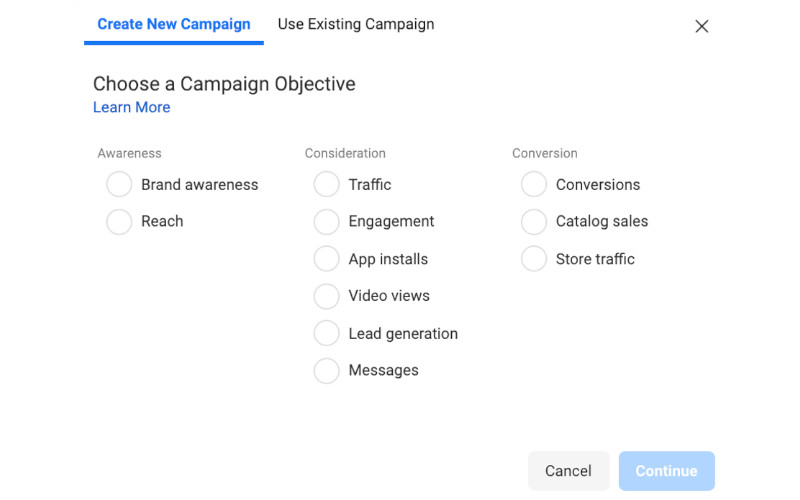 This category deals with how people perceive your brand. Facebook campaigns in this category focus on reaching the most amount of people in your target audience, showing them your ad to increase your brand awareness.

This category deals with getting people to consider engaging with your brand. This can be in the form of:

This category deals with getting people to make purchases from either your online business or your brick-and-mortar store.

While the strategy for marketing differs from brand to brand, you would ideally want your customers to move through a conventional buying cycle of first being aware of your brand, then considering purchasing or engaging with your brand, to finally making the purchase themselves.

#2 Identify the Right Target Audience For Your Facebook Campaign

Once you have identified which Facebook campaign(s) you are going to run, the next step would be to define your target audience. If you are a company selling dog toys, it would be much more efficient and cost-effective to target people that have an interest in dogs rather than targeting people who only love cats.

Check out our previous article on how to find the perfect target audience and customer persona for your ad and business objectives.

These are some of the key components that you can manipulate in your Facebook Campaign: 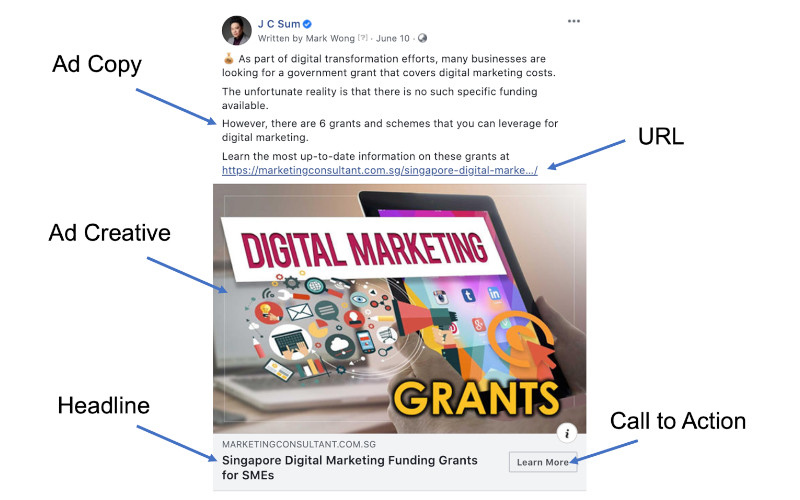 It has been noted that the average attention span of people viewing content on mobile is an underwhelming 1.7 seconds before they scroll away. This means that your Facebook campaign or ad has to be extremely compelling to hold the attention of your prospect. That is where all of the items above work hand in hand to pique the interest of your prospects to make them want to find out more about your offerings.

The Ad Copy refers to the main body of text in the ad itself. After you get the attention of the person viewing your ad when they stop to see your image or video, this will be the next thing that they will click on or read to find out more about what it is you are trying to tell them about. Ensure that it is compelling but not too wordy and long so that you lose their attention. Always ask yourself, why should they care?

Your URL refers to the link that you want your prospects to click on to visit your site to take a look at your offerings. Having a link that does not look suspicious goes a long way.

The Ad Creative comes in a variety of shapes and forms:

In this case of the screengrab above, it refers to the image itself. More often than not, your ad creative is the first thing that your prospects see when they are scrolling through their Facebook feeds.

Vibrant colours or images with faces have been observed to have a higher rate of stopping people from scrolling away as quickly and instead, getting them to pay more attention to your ad. As an added tip, ensure that your creative fits the recommended sizes and aspect ratios for your platform and type of ad.

The Headline refers to the “title” of the ad. Make this as short, impactful and informative as possible. Ensure that you preview your ad before you post it up in case your headline is too long and gets cut off on mobile.

The Call To Action refers to what you want your prospects to do after viewing your Facebook campaign or ad. There is a large number of options to choose from on Facebook, so you must ensure that it fits your ad and the outcome you would like out of it. 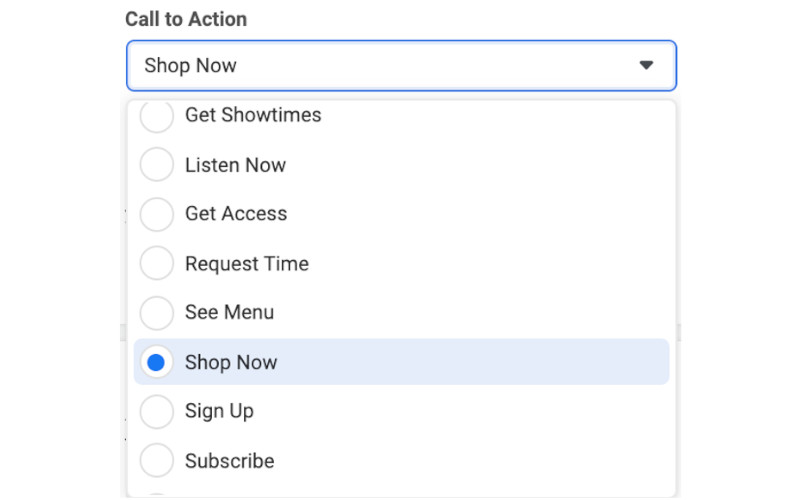 This is similar to building a call-to-action in a website landing page to motivate users to take the next course of action to move them down the sales funnel.

Data metrics and optimisation are extremely important as this will be your “birds-eye-view” and feedback loop of your Facebook Campaign.

This will be covered more in a future blog post, but a few key metrics that should be observed and compared against industry benchmarks would be: Results, Reach, Click-Through-Rate and Cost Per Result. 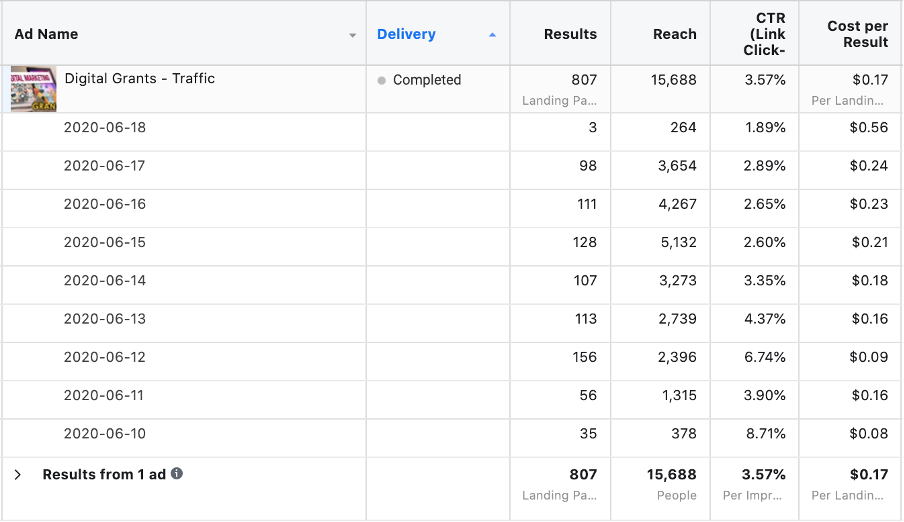 Reach refers to the number of people who saw your ad, or your impression, for the day. In the example above, 15,688 individuals were reached in this campaign.

Click-Through-Rate (CTR) refers to the percentage of people who have clicked on your ad. In the example above, the average CTR was 3.57% for this campaign.

Below are some of the benchmark metrics for the CTR in different industries. You may use this chart as a guide to see how well your Facebook Campaign is doing when compared to the industry standards.

In the case of the ad we are using as an example, it is in the B2B industry, and the CTR was healthy at an average of 3.57% as compared to the industry benchmark of 0.78%.

Often, tweaking your target audience, campaign type or even your ad itself can help you get one step closer to reaching your goals.

#5 Take Your Facebook Campaign to the Next Level With Retargeting

If you want to supercharge your ads, retargeting is a must. In essence, what this does, is that it shows your ads to people who have already interacted with your business, dramatically increasing your click-through rate. It was observed that retargeted ads had a 10x higher CTR than standard display ads.

Website traffic refers to using the Facebook pixel to create a list of people who have visited your website or viewed specific pages. This is especially useful when you want to retarget people who have reached your check-out page but did not complete the purchase.

By reaching out to them again, perhaps with a personalized ad containing a discount voucher or free delivery, it might be just what they need to remind them of their half-completed purchase and give them a nudge to complete it.

App activity refers to creating and targeting a list of people who have taken a specific action in your app or game. If you are running an eCommerce app, you can reach out to your users who have recently made a purchase to offer them a discount code in the form of an ad. This serves as an attempt to keep them coming back to your app to continue purchasing from you.

If your app is a game, you can even reach out to users that reached a certain level in the game to market them a one-time offer for a specific in-game benefit.

Setting up remarketing is essential if you want to push your business to the next level with ads that “follow” your prospects around the internet.

Now you know 5 tips on how to run a killer Facebook Marketing Campaign that can potentially give you an edge over your competitors.

Check out why Facebook is one of the most effective digital marketing platforms.

If you are unsure of how to run these campaigns yourself, you can engage professionals, or even better yet, tap into the new Digital Growth Subsidy that supports up to 50% of strategy and marketing costs for eligible businesses in Singapore and Malaysia.

Find out more about the Digital Growth Subsidy here.

LET US KNOW HOW WE CAN HELP GROW YOUR BUSINESS ONLINE

Mark Wong is a certified management consultant (TR 43:2015) and specializes in hybrid content and outreach for offline and online channels. He holds a Bachelor of Science Psychology from Singapore University of Social Sciences and is a Facebook-certified Media Planning Professional, Creative Strategy Professional and Digital Marketing Associate. He applies his passion for understanding human psychology, perceptions and social processes to gain insights into customer behaviour as a hybrid marketer.

Why Partner with an Award-Winning Digital Marketing Agency in Malaysia

The Importance of Local SEO in Singapore for Businesses